Sweetest library in the Mother Lode

Limited hours due to Covid-19: 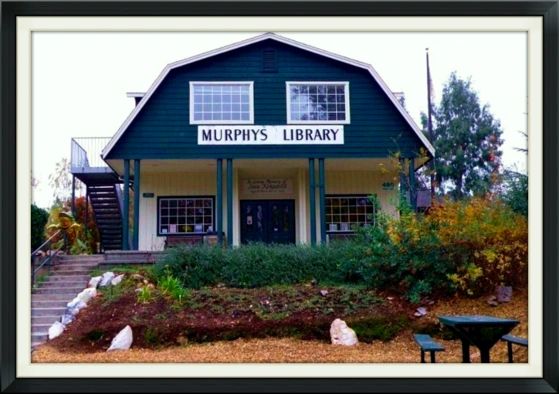 Murphys Library is open to the public

We are please to open our doors to library patrons and book lovers of the Murphys area.

In order to keep our patrons and our staff safe, we will be following county protocols.

Can't  find the book you're looking for in the Calaveras Library system? Did  you know that you can borrow books from other libraries through the  Link+ system?

Murphys Library is a great source for used book at rock bottom prices.  Ask the librarian how to find our used book room upstairs. We've got great titles on all sorts of topics (follow our Instagram account to see what's on the shelves)

Due to Covid concerns we are not accepting donations at this time, but we still have plenty of books for sale!

Murphys Library always has a good supply of new books for your reading enjoyment.

Learn more about the scholarship

Where: Upstairs at the Murphys Library

You and your child will enjoy a reading program that may involve music, crafts, or just a really good book. Presented by volunteers as well as our wonderful librarian.

Holidays in Murphys and other tales of local families, buildings, and history

We’ve invited local historian and author Maureen Elliott to kick-off our first Speaker Series at the Murphys Library. You’ll hear stories of the holidays in Murphys as Elliott brings to life the people and history of Murphys Camp with tales, maps, and pictures.

Elliott is a well-known historian and author of They Walked the Streets of Murphys Camp, a book about Murphys during the early Gold Rush years. She worked at the Calaveras County Archives for 17 years, and credits that experience for her intimate knowledge of the history of Murphys.

Come early for a seat. Space is limited and Elliott is a popular speaker.

Have ideas for future speakers in the Speaker Series? Let us know at murphyslibrary@gmail.com

Where: TBA. Venue will be announced closer to date of meeting.

A luminous debut novel about a widow’s unlikely friendship  with a giant Pacific octopus reluctantly residing at the local  aquarium—and the truths she finally uncovers about her son’s  disappearance 30 years ago.

After Tova Sullivan’s husband died, she began working the night shift  at the Sowell Bay Aquarium, mopping floors and tidying up. Keeping busy  has always helped her cope, which she’s been doing since her  eighteen-year-old son, Erik, mysteriously vanished on a boat in the  Puget Sound over 30 years ago.

As she works, Tova becomes acquainted with curmudgeonly Marcellus, a  giant Pacific octopus living at the aquarium. Marcellus knows more than  anyone can imagine, but wouldn’t dream of lifting one of his eight  tentacles for his human captors—until he forms an unlikely friendship  with Tova.

Ever the detective, Marcellus deduces what happened the night Tova’s  son disappeared. As his affection for Tova grows, Marcellus must use  every trick his old, invertebrate body can muster to unearth the truth  for her before it’s too late.

Charming, compulsively readable, and full of wit, Shelby Van Pelt’s  debut novel is a beautiful exploration of friendship, reckoning, and  hope–a reminder that sometimes taking a hard look at the past can help  uncover a future that once felt impossible. (From https://shelbyvanpelt.com/books/remarkably-bright-creatures)

Murphys Library Book Club will not meet in December

Where: TBA. Venue will be announced closer to date of meeting.

It seems like any other day. You wake up, get ready, and head out.

But today, when you open your front door, waiting for you is a small box, holding the answer to the number of years you will live.

Suddenly, everyone on earth is faced with the same choice: Do they wish to know how long they’ll live? And, if so, what will they do with that knowledge?

As society comes together and pulls apart, The Measure charts the dawn of this new world through an unforgettable cast of characters whose paths interweave with one another: best friends whose dreams are forever entwined, pen pals finding refuge in the unknown, a couple who thought they didn’t have to rush, a doctor who cannot save himself, and a politician whose box becomes the powder keg that changes everything.

The Measure is a sweeping, ambitious, uplifting story about family, love, hope, and destiny that encourages us to live life to the fullest.

Our mission is to provide resources that enhance the library experience for patrons in the Murphys area.

We are always looking for volunteers to help us make our vision a reality. We'll help you find a way to volunteer that best suits you.

We couldn't accomplish our goals without the help of supporters like you. Thank you for your time and donations that makes this possible!

Be a part of the Murphys Library Community! Get news about what's going on in your inbox, and never miss out on anything.

Your generous contributions fund library programs in the Murphys area and beyond.

Murphys Library is a non-profit organization

Be a part of the Murphys Library Community!

Sign up to receive news of what's going on at the Murphys Volunteer Library, as well as information about the Calaveras Library System.